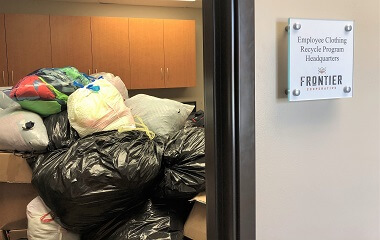 November 21, 2019 (Lincoln, NE) – When two companies unite, there’s a lot of preparation that goes on behind the scenes. Some of the changes that resulted in the unification between Midwest Farmers Cooperative and Frontier Cooperative include a new name and logo, new headquarters, new roles and teams, and of course, updating the brand. As expected, there are a lot of changes that take place when two companies come together; the goal is that change creates opportunity but does not disrupt day-to-day business, and customers are still provided with the same great experience.

With nearly 400 employees, that results in a lot of company uniforms that either have the incorrect company name or an outdated logo. The People Engagement Team at Frontier had a plan in place to get all employees into their new uniforms and ready to go by the September 1 official merger date. But what to do with the uniforms? Recycle them, of course!

In September, Frontier Cooperative began a month-long campaign that not only encouraged the use of the new brand and logo, but also got employees involved in doing their part for the environment. The company launched a Uniform Recycling Program that allowed staff members to bring in their old branded items and recycle them in a responsible way. Rather than tossing out the old, employees were able to donate their outdated or unwanted items and bring them to any of eight different locations within Frontier. In turn, they could exchange past uniforms for newly branded Tshirts made from 100% recycled materials. Here’s how it works:

Frontier Cooperative partnered with DRIVE Marketing Group and Recover Brands to turn old uniforms into recycled Tshirts. The goal of the program was to inspire employees to recycle their old logo uniforms in a responsible, environmentally friendly way and encourage staff to wear new logo items to help establish the new brand. Employees who donated their old logo uniforms were eligible to receive up to three new logo Tshirts made from 100% recycled water bottles and recycled fabric. Employees who brought in items could also earn raffle tickets for a company prize drawing held in October. According to Recover Brands, since 2010, nearly 5.4 million plastic bottles have been diverted from landfills by using them in the Recover recycled garments program.

In the end, Frontier employees donated a total of 3910 items to repurpose into Tshirts and other materials, which equals nearly 1,100 pounds of clothing. Not only did Frontier employees do their part by being environmentally friendly, but they can wear their newly branded threads with pride.

Oct 17,2022
How have you experienced Frontier this last year? That’s a question I use when starting employee and producer meetings. When we stop and think about it, we realize that there are numerous ways we have experienced Frontier in the past year. Common examples I hear are ‘I saw a semi on the highway’ or ‘I saw a sprayer in a field.’ Maybe you saw an employee in the community, helping at a county fair, or participating in a town celebration. Perhaps an employee was judging the 4H/FFA contest your child was competing in.
Sep 21,2022
A proclamation recognizing October as Cooperative Month will be signed by Governor Pete Ricketts on October 3, 2022. This coincides with the annual recognition of October as National Cooperative Month by the United States Department of Agriculture. This year's national theme is "Co-ops Build Economic Power."
Sep 06,2022
Frontier Cooperative Locations to boost internet speeds and provide broadband connectivity to local members and residents have now been installed in Bellwood, David City, Dwight, Brainard and Garrison.