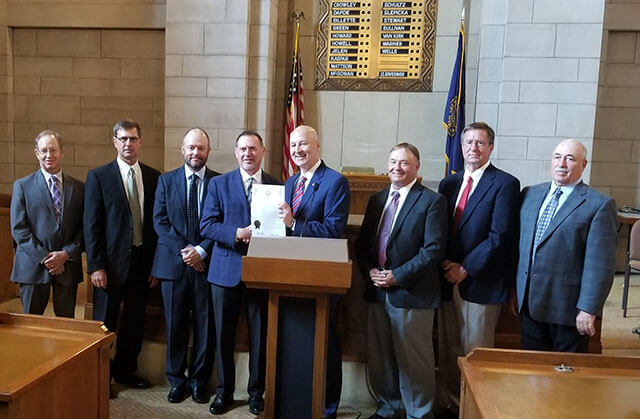 LINCOLN, NE-- A proclamation recognizing October as Cooperative Month was signed by Governor Pete Ricketts and presented in a ceremony at the State Capitol on September 16, 2019. Cooperative Month has been celebrated nationwide and in Nebraska for many years to call attention to the economic benefits which come from cooperative businesses.

The proclamation signed by the Governor notes that agricultural cooperatives serve the needs of Nebraskans in 398 rural communities across the state and directly employ nearly 5,300 people statewide. In 2018 Nebraska’s agricultural cooperatives invested nearly $163 million in facilities and equipment to serve farmers and ranchers while also returning over $57 million in patronage and equity redemption to their farmer and rancher owners. In addition, Nebraska’s farmer owned cooperatives contributed $1.17 million to local fire departments, local school and youth organizations, local and statewide FFA and 4-H chapters and provided numerous scholarships to help rural Nebraska students continue their educations.

In brief remarks at the signing ceremony, Rocky Weber, President & General Counsel
of the Nebraska Cooperative Council, said “Nebraska’s recognition of Cooperative Month
coincides with national Cooperative Month as recognized by the United States Department of
Agriculture. The 2019 national theme for Cooperative Month is “Co-ops: By the Community, For
the Community.” This theme is particularly appropriate for the cooperative system in Nebraska.
Local farmer ownership and control. Local return of profits. Local investment in facilities and
equipment to support their farmer patrons. Supporting their local communities. These are
uniquely cooperative attributes. The partnership between Nebraska’s farmer owned
cooperatives, the farmers that own them and the communities they serve form the backbone of
the rural economy in Nebraska.”

Sep 21,2022
A proclamation recognizing October as Cooperative Month will be signed by Governor Pete Ricketts on October 3, 2022. This coincides with the annual recognition of October as National Cooperative Month by the United States Department of Agriculture. This year's national theme is "Co-ops Build Economic Power."
Sep 06,2022
Frontier Cooperative Locations to boost internet speeds and provide broadband connectivity to local members and residents have now been installed in Bellwood, David City, Dwight, Brainard and Garrison.
Apr 13,2022
Frontier announces scholarship awards to 20 area students.